In 2013 I began investigating solar technologies. By mid-2015 I had reduced my reliance on utility and had been saving 50% monthly. In New York City.

The topic of “going green” seems to have always been near and dear to my heart.  A great concept, yet financially elusive to the residential consumer in its earlier stages. As technologists, we consume and benefit from so much tech that we rarely stop and think about environmental impact.  There are so many opportunities we all have to drive efficiencies — we rarely fully realize just how much we CAN control in our day-to-day activities. I believe we all can make a difference, however seemingly small; in the process seek opportunities to reinvest the savings in meaningful endeavors to improve our lives and communities.

In 2013 I started investigating options of participating in the solar panel craze.  I visited the offices of a solar company in San Francisco, having been in town for other personal matters. I was astounded by the significance of the industry, yet I wasn’t ready to pull the trigger, so to speak.  (I ended up pulling the plug on other things, but more on that later). The reason is that, in my assessments of options, I came to a realization that thorough consideration needed to be given across the 3 financial vehicles by which one could enter the arena of deploying solar panels. They were and are:

By autumn of 2013 I had contacted multiple suppliers, had done my research and, subsequently, kicked-off a process of applying for permits… and just waiting.

(At some point in the future I’ll share additional details, however skipping to 2019, for the time being, allow me to jump to the results phase).

The results, ultimately, speak for themselves.  Following charts provide illustrations along a number of performance indicators.

The chart shows months in the X-axis and $ amount in the Y-axis. An interesting point of inflection is the summer of 2015. That is when the solar panels went “live” and drove immediate impact.  You can see how subsequent years have been significantly lower month-to-month, being 50% lower in comparison to 2013 and 2014 (prior solar panel years).

As above, the below chart represents months of the year across the X-axis. The Y-axis represents energy consumed from the local utility company (ConEdison in my case). Again, the correlation of summer 2015 is clearly showing significant reduction in what is drawn from the utility company.  One might wonder whether household consumption has remained consistent over the last 6 years. I assure you that getting into solar has brought about increased awareness of energy use, additionally driving better behavior for all family members in the household. The high-order bit here is that the panels are able to keep up with our demands, reducing the need to draw on the grid even as the quantity of electric devices in use has increased. 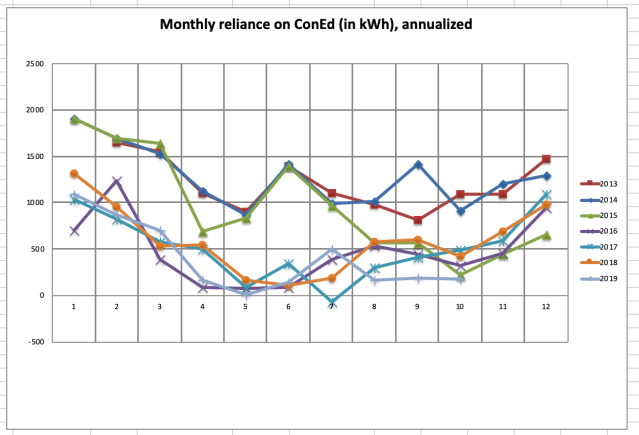 In an effort to keep an eye on the rear-view mirror, validating whether (and how fast) energy costs are changing, I wanted to measure an average annualized cost of 1 kWh that is supplied by the utility company.  The below chart indicates a pattern of decrease inclusive of 2016. However there is a sharp increase in 2017. Most likely attributed to this and, subsequently, this  notice from the utility company: https://www.coned.com/_external/cerates/documents/elecPSC10/StatGRT-13.pdf

Then a drop in 2018 and a slight increase starting earlier this year.  Continuing to keep an eye on this metric will be interesting, to say the least.

Though this could have arguably been the opening chart, I placed it here to indicate a bottom line in having chosen to go solar.  The area, and the angle of the roof is clearly a gating function in terms of how many solar panels can be deployed. A few years ago I installed new cooling and heating systems that increase the demand on electricity during the cooler months, which explains the roller coaster effect in the winter months (as shown on the charts). The net-net is that net metering allows for unused energy to be supplied back to the grid. This did happen, in July of 2017 (vacation time!) when the AC units weren’t exercised as much during the hot summer days.

In the near future I plan to share additional math behind my break-even calculations.

For now, its the weekend, its autumn in New York and the kids are calling 😉

← Out come the outcomes